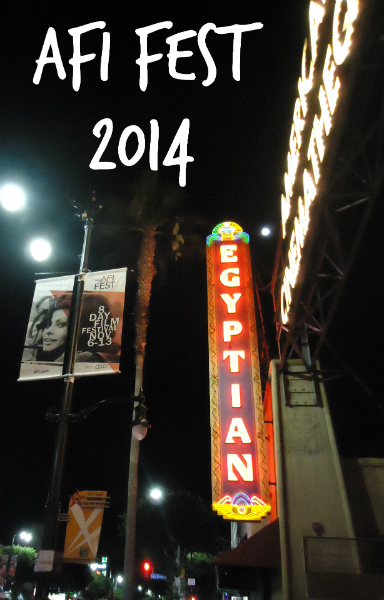 I think I touch upon this aspect every year, but I have a love/hate relationship with film festivals. Undoubtedly, I love seeing the films – ranging from world premieres to the smallest of independent cinema selections from around the globe. It’s a cinephile’s dream to have access to films that satiate every visual and narrative craving imaginable. And I must admit, the buzz around Hollywood during the 8 day AFI Film Festival couldn’t be more vibrant.

Unfortunately, where film festivals tend to lose me is that I’m not a fan of waiting over an hour, sometimes an hour and a half, in line to see each film. Therefore, by my calculations, I spent what would be the near equivalent of an 8-hour work day just in line alone to see the films! Yuck! It also sucks that people, even at big industry festivals, still lack basic movie theater etiquette at times. (Though I wasn’t at this screening, I know someone who was, and this is a prime example, albeit an extreme one.)

Since many of the big gala films that AFI screens already have a distributor and a theatrical release date on the books, I tend to lean toward seeing lots of the smaller independent and foreign films that won’t likely see US theatrical distribution right away, if ever (though I’m pretty sure all of the films I saw will release at some point soon.)

I saw 6 films this year, spanning from foreign drama, to indie horror, to bringing the headlines front and center in documentary form. Here’s a quick re-cap of AFI Fest 2014 (with trailers if available) in the order seen…

Film: Two Days, One Night (Deux Jours, Une Nuit)
Genre: Foreign Language Drama
Rating: A-
Overall: Marion Cotillard can usually do no wrong in my book and this is another classic example. She gives a stellar performance as a Belgian woman who spends her weekend after an extended medical leave of absence for depression, convincing her co-workers to forgo their bonus checks so that she can keep her job. Upon learning that a majority of them voted for her dismissal in favor of their bonuses during her leave, the film follows her as she swallows her pride and makes each visit after she gets approval from her supervisor to hold a re-vote first thing Monday morning. It is a portrait of a woman desperately seeking both monetary and emotional security as they seemingly continue to slip away from her over the course of Two Days, One Night. What a complicated, yet delicious predicament, when you consider most people not only relish bonuses, but that as she makes each visit you realize her co-workers are in dire financial straits themselves and can certainly use it. The film takes a nice twist near the end, that ultimately speaks to stepping on others to get ahead and begs to question: what would you do?

Film: Clouds of Sils Maria
Genre:  Drama
Rating: B-
Overall: Juliet Binoche is always a force on-screen; and while not leaving behind those acting ticks that often make Kristen Stewart rather one-dimensional as an actress, she held her own against Binoche. I appreciated the rich and complicated relationship between them. This in and of itself makes the film interesting. It’s clear that the play Binoche’s character, Maria, is acting in again 20 years after it first made her famous (with the caveat that she is now playing the older woman as opposed to the youthful lead), is supposed to mirror her relationship in the film with Stewart, who plays her young personal assistant helping her prep for the role. On paper, I can get behind this story within a story concept that’s linked thematically in such a way that fiction becomes (movie) reality. However, I found the plot pretty convoluted in a way that doesn’t make me want to revisit it again with fresh eyes to come to a more firm conclusion about out what’s going on. That being said, kudos to Binoche for her work in this rather complex film, and to director, Olivier Assayas, and DP, Yorick Le Saux, for giving the audience a strong sense of place in the gorgeous setting among the Swiss Alps. Binoche and Stewart have great chemistry, but the lack of a clear narrative paired with lots (and I means lots) of dialogue makes the film hard to follow. I’m not opposed to listening closely to scenes filled with nothing but dialog, but I feel as though if I were to watch this again, I’d still be as unmoved as I was the first time – but somehow still enthralled by the ever-lovely Juliet Binoche.

Film: It Follows
Genre:  Thriller/Horror
Rating: B
Overall: As far as thrillers go, this one does a great job at keeping things entertaining. I had a hard time adjusting to the premise at first, but what’s realistic about a deadly figure that follows you relentlessly in any form it chooses (even as people you know) trying to kill you, until you pass it on to the next person you have sex with and it starts following them relentlessly? The twist is that that person has to stay alive, otherwise once it claims that victim, it simply backtracks down the chain and comes after you again. It’s a cinematic catch-22 if I’ve ever heard of one. With a clear salute to genre films of the 80s, It Follows was a welcome change of pace among the more hyper-dramatic films on the schedule.

Film: Heaven Knows What
Genre:  Drama
Rating: B+
Overall: Heaven Know What deals with addiction in the most raw and realistic way I think I’ve ever seen on-screen. This is unquestionably because the lead actress, Arielle Holmes, re-enacts her own personal account of being a young drug addict on the streets of New York based on her unpublished memoir, by playing a fictionalized version of herself as Harley. How the film came to be as I researched more about its origins, is almost as interesting as the plot itself. Holmes admits she was still indulging in the lifestyle during production and this is likely why the film is so intense and unique. I walked out the theater exhausted after delving into her world. Admittedly, I was quite annoyed by how much shouting takes place in this movie and the over the top use of music, to the point that it gives you a headache; but once I distanced myself from that and reflected back, it occurred to me that this had to be intentional outside of building conflict. Harley’s world (as well as Arielle’s reality) was hardly ever quiet I’m sure, and the need to use perhaps dimmed the noise some. The even sadder part of this story is that it is a love story. It quickly introduces Ilya, a user himself, and the boy she would do anything for while being unable to do much of anything for herself, except get high. The good news is that Arielle seems to be alive and well and is causing quite a buzz because of this performance, so you have to believe that Harley does learn to do for herself…eventually.  This was, by far, the most emotional and demanding film I saw at the festival. 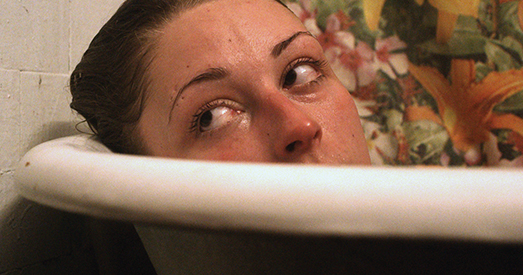 Film: Happy Valley
Genre:  Documentary
Rating: B+
Overall: I was expecting something much different from this film than what I got, but it’s not a bad thing at all in this case. When I heard that a film about Penn State and Jerry Sandusky was on the docket at the festival, I agreed to see it thinking this film was going to go more in-depth about the actual case behind Sandusky and his now tarnished legacy. What I got was something infinitely more interesting: how a town reveres a college sport and those who make it a success as near God-like and how ultimately, it birthed an environment for decades of abuse to continue. The film shockingly touches upon the Sandusky scandal and the cover-up of his actions years before he was actually punished. Yet, a large portion of the film focuses on how this God-like perception of Joe Paterno blinded an entire community from holding him more accountable when it came to right and wrong. While fans were quick to discard Sandusky when the allegations proved to be true (though he was God-like in his own right up until then), Joe Paterno still somehow remained a hero in spite of his knowledge and lack of aggression to do something about it. Happy Valley does an admirable job of highlighting why and how this scandal went on for so long (in large part due to skewed priorities), begs to question who is to blame; but most importantly, proves why man, who can be beloved, should never be revered.

Film: Girlhood (Bande De Filles)
Genre:  Foreign Language Drama
Rating: B
Overall: What I think this film did best, as any sign of a well-crafted film does, is take you to a sense of place and time, back to those awkward years between adolescence and adulthood. What’s interesting about watching this film as an American female, is that you realize pretty quickly that those awkward years don’t look drastically different for Parisian females either. While the circumstances and cultural nuances differ, girlhood is that time when you’re simply trying to find your way. Following Marieme’s tale from innocence to not so innocent, provides for a strong narrative and the female lead, Karidja Touré, captures that journey with eloquence. That being said, the slight weakness to the film in my opinion had more so to do with pacing. When telling a coming-of-age tale, it’s always difficult keep a satisfactory pace. You want to give time to every narrative point, while showing growth/change over time. I recall instances where I felt scenes were a tad too long and could be cut to further move the story along. Aside from this, Girlhood is an endearing cinematic experience and was a wonderful way to end AFI Fest 2014.