Just a few doors down the street from “The (over-hyped) Best Iced Latte in America,” rests one of the newest additions to Larchmont Boulevard, and it’s quickly becoming the ice cream spot in town. It’s not unusual to see the line hanging out the door into the wee hours of the night; as Angelenos happily fork over their hard-earned money for a slightly expensive, yet decadent, brain freeze.

Originating in The Beaver State (that’s Oregon, if you didn’t catch my attempt to be clever), Salt & Straw aims to take a beloved American indulgence to a new level. You might be asking, how does one do that exactly? If you think about it, unlike certain treats, ice cream couldn’t be a more accessible delicacy. If you’re in dire straits in the middle of the night to deal with a crappy day by drowning your sorrows in a tub of ice cream, a trip to your neighborhood grocery store happens to also have the added benefit of welcoming you with more options than you’ll ever need. And yet, I can see why scoop shops, like Salt & Straw or Sprinkles Ice Cream, might withstand the test of time…and the abundance of accessibility.

In a nutshell, it’s because when heading to specialty places such as these it’s in “the event” of it all. It’s in the getting in the car with a destination in mind. It’s in the anticipation of a rewarding treat. It’s in the gazing at the menu, deciding what you want. It’s in the tasting of the samples. It’s in the ambiance. But ultimately, it’s in the product itself – usually served with the freshest of ingredients and thoughtful presentation.

Suffice to say then, that Salt & Straw makes ice cream an event.

On a dreary, late Saturday afternoon a few weeks ago, we paid a visit to see what The Beaver State famously had years before us Angelenos, a Salt & Straw. With much luck, and I’m sure fortuitous timing (everyone was likely at the mall finishing up some last-minute Christmas shopping), we found the place nearly deserted. In fact, we were in and out in a matter of minutes, thanks to no line!

What immediately feels distinct about Salt & Straw, compared to your more typical scoop shops, was the easy and inviting ambiance. This was achieved through carved wood; and warm, moody lighting. The space isn’t very big, and there isn’t much seating; but for the short time you’re inside, it certainly leaves an impression. 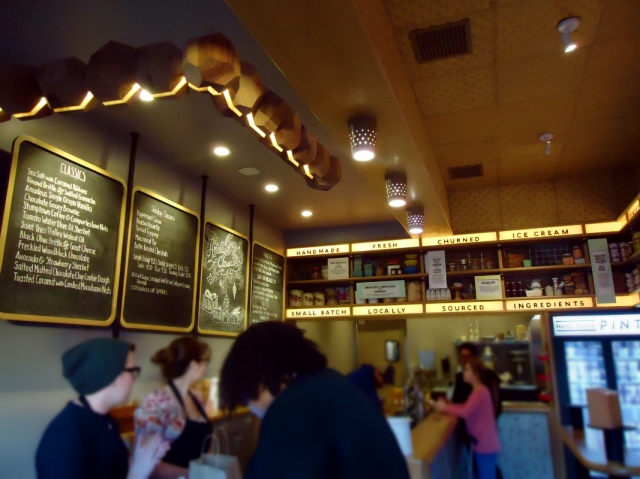 For just over $4.00, I walked out of Salt & Straw’s welcoming shop with a scoop of Chocolate Gooey Brownie ice cream (pictured above) in hand. While the price is reasonable if you’re headed in for a solo treat for yourself, or on a date, it can certainly add up if dad decides to take a family of four out for ice cream and everyone wants a double scoop.

That being said, one spoonful was literally all it took. As the ice cream hit my tongue, I could taste the love that went into every aspect of it. It wasn’t until I got home and did a little research, that I realized the detail put into what ultimately, might come across as a simple scoop of ice cream. Turns out, the chocolate used in its base is from organic Holy Kakow Chocolate products, and the brownies are baked fresh, infused with marshmallows to give them a special fluff…and this dedication to quality is before they’ve even churned it together to make the final product!

Salt & Straw is regarded for their use of locally sourced, fresh ingredients; but also for their eclectic flavors. Admittedly, I went with a safe flavor for my inaugural visit, but take two will find me bolder to try some of their more creative options: Avocado & Strawberry Sherbet or Ojai Olive Oil & Burnt Orange Marmalade. Then again, I can get behind their Central Coast Champagne Sorbet, too.

They keep their popular permanent “classic” flavors on-hand at all times. The great news is that they’re also constantly rotating their selection, introducing new flavors every month to keep the menu fresh; and to keep Angelenos coming back, forking over their hard-earned money for a slightly expensive, yet decadent, brain freeze.

And this, my friends, is how you beat ice cream accessibility. It’s the big “event” taking place in Larchmont Village at the moment.

{Order your favorites to-go by the pint!}

2 thoughts on “We All Scream For Ice Cream”