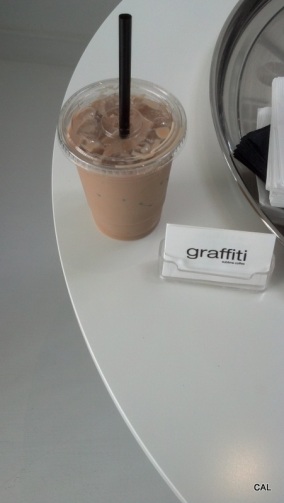 Ask and you shall receive! I won’t take full credit for this, but apparently the right people over at Graffiti  read my post last August (and probably all of the feedback on Yelp) and made some major improvements to how they do things. I stopped in for a pre-Superbowl party caffeine fix this past Sunday and was pleasantly surprised when I was….

1) …asked for my milk choice!?! And not just your typical 1% or 2% options, they even offered me almond milk (which I jumped on and thoroughly enjoyed)!

2) That cash only nonsense? Gone. They take debit, baby! Something that shouldn’t have ever been an issue in the first place and I knew wouldn’t last long anyway.

3) I’ve been here a handful of times in recent months and the very unnecessary valet parking service is seemingly kaput. Thank goodness. I’m all for high glam, but there is a fine line and this totally pushed it.

4) It also looks like we’ve hired an interior decorator, somewhat. It’s still very much a completely stark white and black palette with a minimalist flair; but I had to admit, I loved the new addition to a wall that just needed something. It’s become my new personal motto: 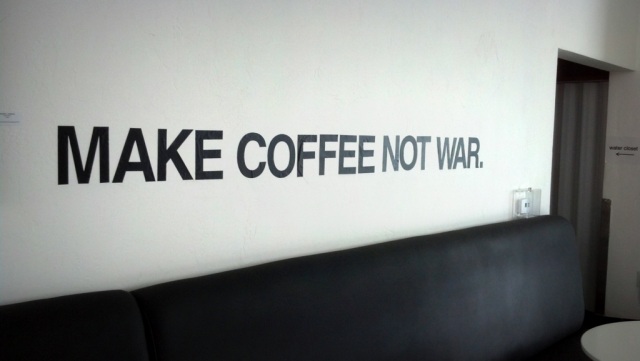 Graffiti went from a B- to a B+ in my book thanks to the improvements, but because 1) I don’t get the really random, huge, and completely misplaced painted portrait of Anne Hathaway on the wall; and 2) I’m noticing in the attire section on Yelp, apparently Graffiti has gone formal and a jacket is required? I’m assuming this is a joke, but if it’s not it’s a step back. Even the baristas are in jeans. Come on.

Now if I can just get them to re-think the name or work with it in a more concrete way – you can’t have a business called “Graffiti” with not one iota of color in the place besides the pastry case.

We’re making progress, people. But as they say, there’s always room for improvement. I’ll keep you guys posted (as I’m finishing my no fuss decaf vanilla latte from Coffee Bean).