There aren’t many reasons I’d leave my perfectly heated apartment to step out into 40 degree temperatures on a windy Friday night. It’s also not a habit I’d encourage when the final destination is the beach of all places. Hello, frost-bite! (It’s on record that I’m an admitted wimp when the weather drops below 75 degrees – yeah, yeah). However, there are exceptions to every rule and I found myself happily breaking it as I bundled up with one of the few thicker sweaters I actually own and made the trek to the Santa Monica Pier for Cirque Du Soleil’s, Totem. 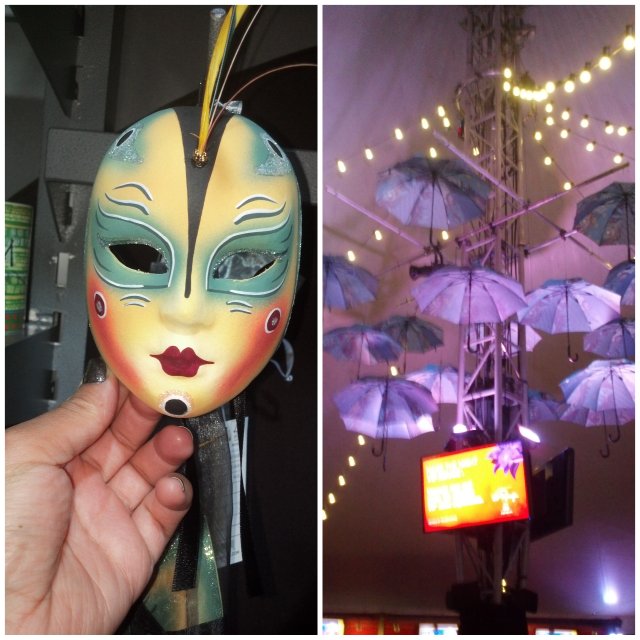 {Killing time before the show, enjoying the scene. LOVED this mask, HATED the $60 price tag.}

Up until just a few years ago, the only time I’d ever seen a Cirque Du Soleil performance was on PBS television, glued to the screen marveling at what the human body can do, and how dazzling the human body can look while doing it with the right lighting and costume design. Sure, watching a Cirque Du Soleil performance on television can satiate anyone who loves a (cheap) theatrical concoction of narrative, visual, and athletic ingredients, and with the added perk of perfect camera-work gives you the best seat in the house. And yet…

There’s still nothing like seeing it right in front of your eyes, LIVE. You’d swear at times that they were lying to you.

Totem, the 3rd Cirque Du Soleil live performance I’ve seen, (Iris being the first, and Michael Jackson’s Immortal World Tour, second) is a visual exploration of the evolution of mankind. Thematically, there were points in the show where it is quite obvious we are looking at stylized interpretations and symbols representing the development of the human species, though there were times I questioned what I looking at and how it tied back into the larger narrative. It later became clearer once I’d read up more on the show, but I have to admit, given the attentiveness to the visuals and the acrobatics it really didn’t matter at the time. You’re so transfixed on the ability and action in front of you that you could care less whether or not it made any sense.

{A still from one of my favorite acts of the night. Click photo for source.}

Where I might give a less than stellar review would be on the design of The Grand Chapiteau (a.k.a. the tent) itself. This is a traveling presentation, and as such, comfort for the audience isn’t necessarily always first priority, but more about practicality (thank goodness the bathrooms were reasonable). While I commend the attempt at stadium style inspired-like seating, it would have been super helpful to have a steeper design to the seating chart. Much of the action was ground-level. As such, you could see the audience bobbing and weaving their heads just to see around each other. I did okay after switching seats with my boyfriend to see the action, but at 6’2 he had a hard time sitting in the seats in general. There’s hardly any leg room and let’s just say you become “friendly” with your neighbors pretty quick.

I also couldn’t help but wonder about the location choice right on the water in the dead of winter (even an L.A. “winter”) given the array of venue options in town. While I’m sure Cirque is selling tickets regardless and I would go anytime the opportunity presents itself, this show would be amazing on the beaches of Santa Monica on a July evening as the sun sets. Just my two cents.

Cirque Du Soleil’s Totem is at the Santa Monica Pier until March 16th, 2014.