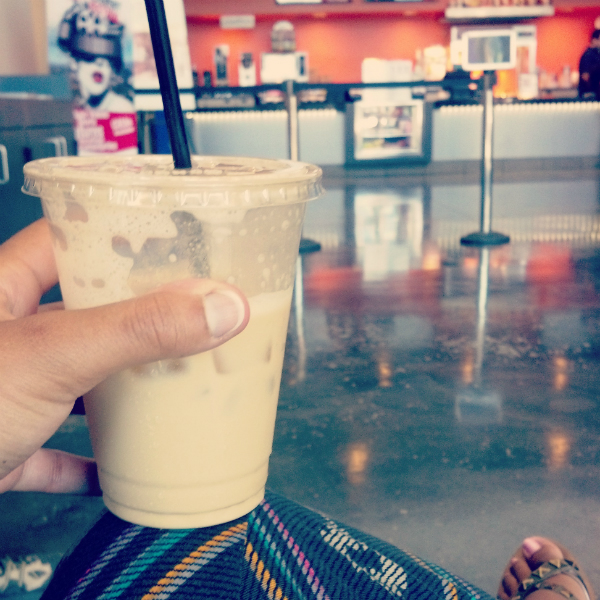 1. Unfortunately, the “best iced latte in America” is overrated.

As evidenced from the image above, you can see that I’ve been up to my ol’ shenanigans again on the latte front. I told you I’d be back after my first visit to Go Get Em Tiger (yes, that’s the coffee bar’s name) to say hello again to the current reining champion of the “best iced latte in America,” to see if perhaps I misjudged my rather uninspired experience a few weeks ago. I didn’t. I was actually even more underwhelmed this time. I ordered the drink just the way it comes: espresso, their famous almond-macadamia milk, and ice. I deduced that it is, in fact, the almond-macadamia milk itself that I don’t care for. What’s interesting is that I’m a lover of all milk types: almond, soy, whole, non-fat….I guess just not when macadamia nuts are involved. So there you have it boys and girls, I’m breaking up with Go Get Em Tiger’s almond-macadamia/best-latte-in-America for good. However, it still wins my heart for having the most creative business name yet.

As evidenced from the image above (but not exactly clear), I’m in the lobby of the Laemmle Theater in North Hollywood, not only coming to the conclusion noted in #1, but waiting to see what turned out to be an amazing documentary film, Rich Hill. It’s a moving portrait of three young boys and their families as they live day-to-day in Rich Hill, MO – population: 1,393. The irony is that its inhabitants are far from “rich,” monetarily-speaking. The film subtly enters Andrew, Appachey, and Harley’s world sharing the harsh socioeconomic conditions plaguing much of small town America, and how our youth is navigating the journey. I encourage you to see this film. It’s a narrative told so beautifully, so gracefully, it leaves you wanting more. You get to know the boys in such a way that you care about what happens next. This is not a case of it being over once the screen fades to black.

3. Don’t leave fresh produce in the car while waiting in the lobby to see Rich Hill, snapping the image above, as you come to said conclusions about lattes.

Clearly, NOT evidenced from the image above, I stopped at the Larchmont Farmers’ Market to buy my favorite type of lettuce to make salads for the week ahead before heading to the movies. Somehow it seemed completely OK to me to leave lettuce in the car…in 100° weather…while I went and saw a movie. I just love throwing away money, especially, just after watching a documentary about poverty in America. This was a total “what the hell was I thinking?” moment.

4. I’m 3 years behind on the realizing how incredible Beyoncé’s 4 album is.

Sure, I heard the singles released to the public, but after catching Beyoncé’s “Life is But a Dream” documentary on HBO Go earlier this week for the 2nd time, I was enticed to actually listen to the entire album. How did I miss what an incredible record this is? It’s been on repeat all week. Better late, than never I guess.

5. A change of scenery works.

Like most people, I spend HOURS a day on the computer because of my job…and because that’s how society works these days. I also spend much of my free time blogging. That means, I’m on a computer – ALOT. It was an invigoriatiog change of pace to grab my laptop, headphones, and notebook and head over to a local cafe to sit and blog for almost 4 hours on a warm Saturday afternoon. Though I have a nice, comfortable desk set-up at home  (in front of a large window no less), and a coffee machine on my kitchen counter – I found the change of scenery inspiring as I worked on a post for the week ahead. Forgive yet another photo of a latte, but between you and me…it was better than the one above anyway…and half the cost.

I’m looking forward to some me time this weekend. So, I’m taking myself to the Van Gogh exhibit at the LACMA and then I’m off to see a new indie dramedy that should be right up my alley. Admittedly, I’m more excited for the Q&A than the film itself (and p.s. this never happens, I usually don’t care for Q&As and often skip them, but this one features two of my favorites.). I’m SO EXCITED. I’ll fill you in next week.

Happy weekend to you!