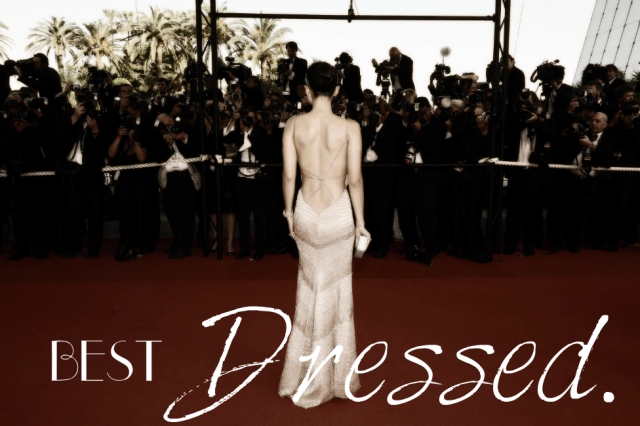 Closing out a much-need, productive, yet relaxing 3-week vacation on the couch with my (they-just-don’t-know-it-yet) BFFs Tina Fey and Amy Poehler, and the 72nd Annual Golden Globe Awards wasn’t too shabby. At the very least, having the festivities of the show to fall back on did wonders at distracting me from my end of vacay blues.

Overall, the show kept me engaged. Though there were a few “WTF?” moments (paging: the weird vibe between Jeremy Renner and J-Lo), Tina and Amy did a great job. However, I always feel that the Globes (like the Oscars) should really incorporate their hosts into the show more. The Globes have to be the easiest hosting gig in town. Aside from the opening monologue, you only see them on-stage a few more times and it’s usually just to introduce someone, rather than keep the energy of the show alive.

I was happy to see some much deserved wins of the night (J.K. Simmons, I’m looking at you!); but also slightly disappointed at the unexpected upset for best actor in a motion picture. Admittedly, The Theory of Everything was the one big award-contending film I didn’t get to in 2014, but plan to catch soon. That being said, I was pretty sure David Oyelowo was a shoe-in for that honor for his formidable work as MLK in Selma. I guess we’ll see where The Academy stands on this issue next month.

And can we take a moment to reflect on the greatest speech of the night? Mr. George Clooney is in love. So in love. What a beautiful acceptance speech and the kindest words a man can utter to his new bride. The man had me choking back tears. Side note: I read that the tux he was wearing to accept the Cecil B. DeMille Award was, in fact, his recent wedding tux. Too sweet.

Aside from who takes home the statue – this is the night to star-gaze at all things fashion. I caught a bit of the red carpet pre-show, but ultimately was annoyed that we didn’t get to see steady wide shots of the gowns for any length of time because they were usually being interviewed at a medium. So, I did what any gal had to do…the internet. I got my full fashion fix the next day over a morning cup of tea.

I’ll preface, as I usually do, that when thinking about my favorites of the night – I went for total package glamour. This meant not only a show-stopping ensemble, but impeccable hair, make-up, and accessories. These ladies nailed it. 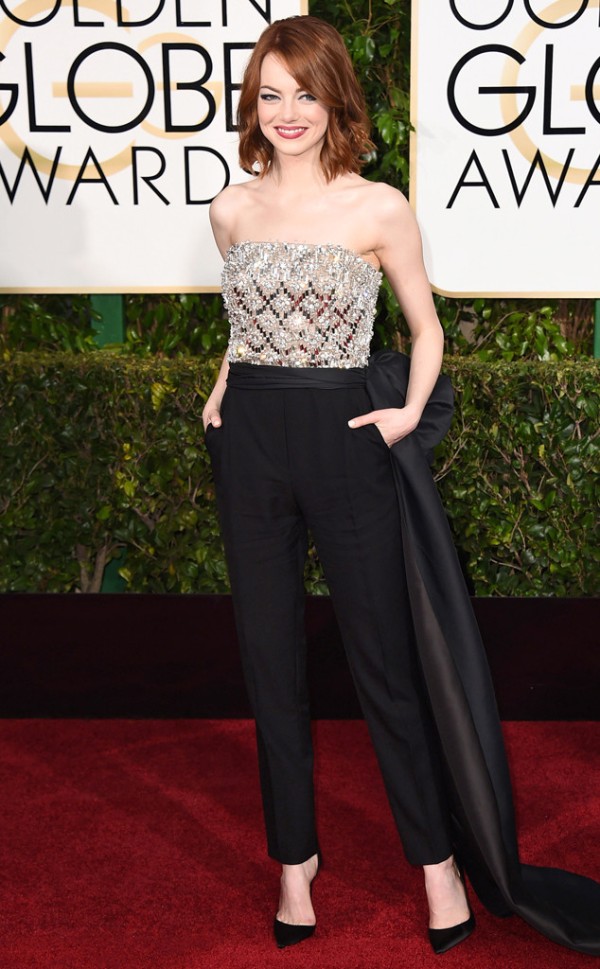 As we bid adieu to what was one of the heaviest rain systems we’ve seen in years in LA (yes, we’re OK!), we also say a final farewell to a powerful year in cinema with the biggest celebration of them all, the Academy Awards. I was so thrilled to see all of my predictions win the major categories. I was especially ecstatic to see Lupita Nyong’o and 12 Years A Slave take home well-deserved statues last night. Though I saw that film nearly 5 months ago, it still gives me the chills when I think about it. And to me, that’s the epitome of masterful film-making.

Ellen DeGeneres was simply delightful and managed to carry the broadcast forward with humor and grace. I can’t image a tougher gig to land in Hollywood, because it’s also the most critiqued the next day. What I found so refreshing about her was how comfortable and completely in her element she was, seemingly un-phased by the pressure. (And I’m sure Samsung is over the moon with that blatantly obvious product plug.) Overall, for a nearly 4 hour presentation – I thought it was well done. And if I do ever have a moment of doubt, I just think back to the year Anne Hathaway and James Franco  hosted and I’m suddenly more confident in my assertion.

And can I just stop and take a moment to salute:

Now on to the fashion!

Like last year, I was a bit disenchanted with the night’s fashion. Don’t get me wrong, there were some fabulous dresses on the red carpet, but I had very few WOW! moments (there are only 2 on record). This is always quite perplexing to me. The night to really show-off and add that “I’m a movie star” glamour is on a night like this. My philosophy would be to go all out and make ’em jealous!

The good news is that there we a handful of starlets that got it right among of the many safer and less dramatic looks of the evening. Here are my top 5 best dressed on Oscar night, with honorable mentions to follow.

Who were your favorite looks?

What a stand-out on the red carpet last night. Aside from being the only starlet to boldly rock a bright color among a flurry of pale and darker-colored dresses; she was also the most playful, by creating a solid theme when coordinating this whimsical look. The Grecian-style design, paired with a sparkling encrusted headband is refreshing, yet sophisticated.  Lupita is and looks every part the goddess in this light blue number by Prada. Bravo! 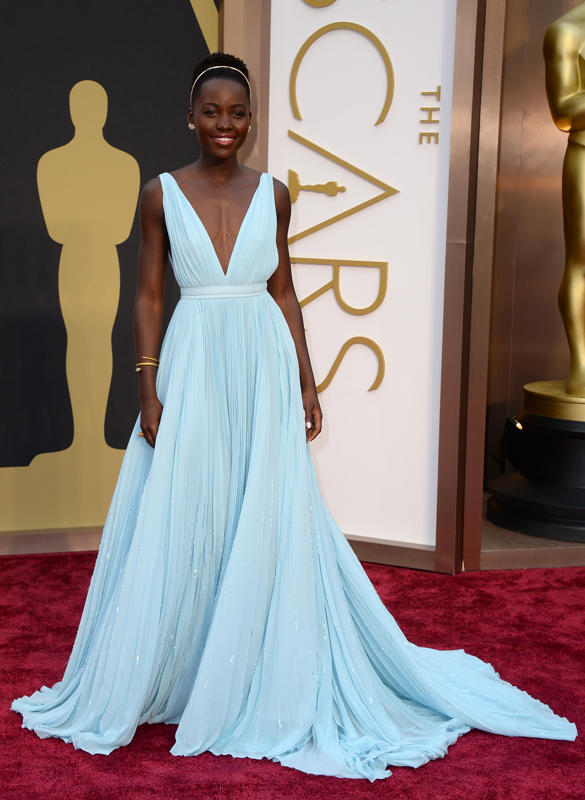 What would look like something is totally missing on anyone else, not only looks complete, but oh-so-polished on Charlize Theron. The reason this dress works is because it’s a risk, and one of the very few of the night on the red carpet. Clear straps on a dress like this could look totally ridiculous, particularly as your eye is drawn to the bottom where you’d expect a simple straight line thinking “don’t overdo it, Charlize.” Instead, she greets you with two last embellishments: pleated organza strips creating a fuller more mermaid-inspired skirt…and a train! By far, she had on my favorite piece of bling of the night with that stunning Harry Winston drop necklace. Ladies and gentleman, this is a movie star!

It’s hard to believe this woman is turning 50 this year! Sandra Bullock is a testament that some things do get better with age (and perhaps some Botox – but to each his own, no judgement here if/when it’s done right). This midnight blue Alexander McQueen dress is such a stunner. I can only imagine that if this striking hue came across so well on-camera, how show-stopping it must have been in person. Aside from being my favorite color of the night, the elegant drapery at the waist paired with just the right amount of fabric at the train makes it the definition of evening gown glamour. The rest is in the details: the side swept tresses, the Lorraine Schwartz half lobe sparkling studs (so on trend right now, we’ll be seeing this A LOT), a simple bracelet, and yes, I even adore the blue nail polish. This is Sandy at her best. And to boot, I L.O.V.E. that she’s maintained such a positive reputation in Hollywood. Rumor has it, she’s one of the sweetest people you’ll ever meet. Bonus points!

Kate Hudson was slated to be my dressed of the night when I saw her walk out onto the Oscar stage in this gorgeous silver beaded Versace gown with the best glow the night (I need to find out who does her facials and book an appointment ASAP!). The deep plunging neckline to the belly button is always a risk (hello, wardrobe malfunction), but she has the perfect frame to keep it sexy, yet classy. Minimal jewelry is the right way to go with a dress such as this because the intricacy and embellishment alone makes this gown one huge piece of fine jewelry. I’m infatuated with the simple knotting and drapery at the waistline to just below the hips giving a touch of exaggeration elevating this dress to one of the best of the night. To make things even better, the gown is still incredibly chic with or without the removable cape. This was one of two pure WOWs of the night. The other went to…

Jenna Dewan-Tatum is quickly becoming one of my absolute favorites on the red carpet. She nails it EVERY time in my book. I can’t image too many ladies being able to pull of a near flesh tone dress with such elegance. The silhouette is incredible and I adore the sequined bodice that subtly leads to an unexpected feathered tulle skirt. This dress was one the other WOW moment of the night. Her hair, make-up, and jewelry are impeccable. Channing Tatum is one lucky guy. Flawless.

**Disclaimer: Since it’s obvious I wasn’t at this year’s ceremony snapping high res photos, all picture sources are here, where you’ll need to drive through the slideshow to find it – except Jenna Dewan- Tatum sourced here. Honorable mentions are linked just below the collage.

Not to brag, but this past Sunday I spent nearly four hours with the Hollywood elite at the Beverly Hilton Hotel sipping a cool beverage while rocking the most awesome ensemble to rival the stars…all from the comfort of my boyfriend’s apartment. Okay, so technically I was a few miles down the street, drinking bottled water, wearing a sweatshirt and some shorts; but hey – I was comfortable, warm, and had the best seat in the house!

The 2013 Golden Globe awards were surprisingly very entertaining this year. From the awesome duo hosting duties in funny gals Tina Fey and Amy Poehler, to the surprise range of unexpected winners (didn’t see Argo beating out Lincoln!), and some pretty moving acceptance speeches (paging Jodie Foster!). It’s also the time to discuss all things fashion. Prior to the broadcast, I spent an hour and a half watching the Hollywood glitterati make their way down the red carpet. Here are my top 5 best and worst dressed ladies. Looking forward to Oscar Night! 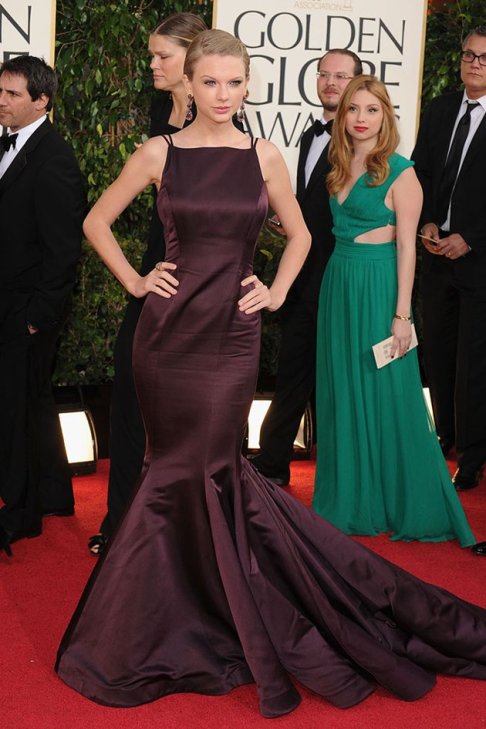 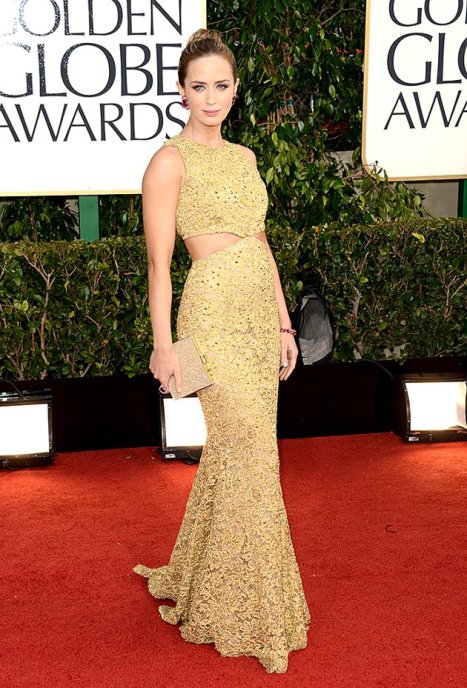 **Disclaimer: Since it’s obvious I wasn’t at this year’s ceremonies snapping high res photos, all pictures are courtesy of Yahoo.com! Photo sources are noted below: