It’s the battle of the ice cream gods and I, for one, love some healthy competition! Not too long ago, I made the small trek over to the 90210 to check out the Ice Cream Lab, the newest addition to the South Santa Monica Boulevard family. This futuristic inspired ice cream parlor had the  courage to open its doors down the street from the famed Sprinkles Cupcakes empire, that also opened a counterpart ice cream shop next door last spring. What better excuse to add a little ice cream to my beloved Sprinkles cupcake this time around to compare and contrast who does it best when it comes to a proper brain freeze? (The things I do in the name of blogging!)

Hands down, Sprinkles Ice Cream blows the Ice Cream Lab out of the water!

While the Ice Cream Lab relies on the unique power to instantly create your frozen treat using liquid nitrogen machines right in front of you;  ultimately, it’s the limitations in their menu that weaken their panache for me. Sprinkles does what I think always works best: keep it simple, and keep it customizable. Not only do you have a large selection of ice cream flavors to choose from, your frosty delicacy is served in a myriad of ways: in a red velvet waffle cone, as a sundae, between cupcake tops or cookies for a sandwich, or just keep it basic and in a cup with toppings galore. Bonus points in my book for the option to also create a milkshake, malt, or even a float if the mood strikes you. The fun with Sprinkles Ice Cream is that the options are endless.

On this particular Saturday afternoon visit, I stopped into the two-tone red and white parlor and indulged in a Sprinkles sundae (first pictured above for your viewing pleasure). It’s a scoop of ice cream with one cupcake of your choice. I had to go with their famous red velvet cupcake and the vanilla bean ice cream. The taste and texture of the slow churned ice cream with the moist fluffy cake covered with thick frosting was pure heaven (and yes, I was on a sugar high for the next three hours).

Admittedly, it’s a pricey treat, but one that I am a-okay to give in to occasionally.  It’s no secret that I am a fan of Sprinkles cupcakes and when paired together with their fresh gourmet ice cream…there are no words. Summer is in 3 days gang – and I plan to spend a few of them with a quick stop here (yeah right). Hope to see you there! xx

Welcome to the land of champagne wishes and caviar dreams! Ice-Cream Lab recently opened its doors just down the street from famed Sprinkles Cupcakes on Little (South) Santa Monica Boulevard in the 90210. Its shtick? Creating freshly-made organic ice cream to order using futuristic liquid nitrogen machines to freeze your treat right in front of you.

We headed down to Beverly Hills for the afternoon to walk around and check out the newest addition to the boulevard. I have to say that overall, the experience was just okay. I very much enjoyed their approach in using fresh ingredients, and the liquid nitrogen gimmick was cool…for about 5 minutes. While they all sounded yummy, I was not happy that essentially you’re limited to choosing from only 6 pre-designed lab creations. It seems in this day and age, the way to go is by offering customization in my humble opinion – especially, when it comes to ice cream.  Didn’t anyone get the memo? At $5.00 for a small (5 ounce) and $7.00 for a large (7 ounce) cup of ice cream, it was a pricey treat – but this wasn’t a huge surprise. 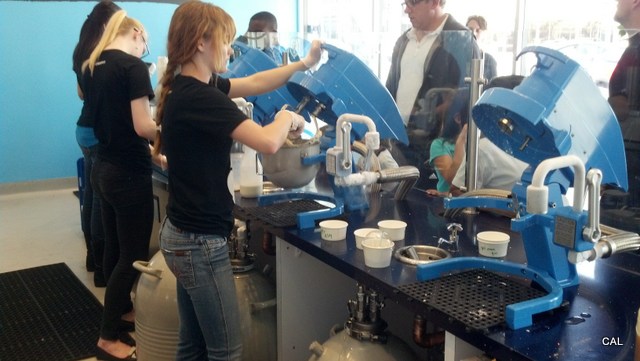 I went with a small Blue Velvet ice cream: blue velvet cupcake with cream cheese frosting (pictured above). It was a delicious way to spend 20 minutes on a Saturday afternoon. Unfortunately, beyond the made to order gimmick, I wasn’t terribly impressed and didn’t have that “I’ll be back” feeling. Ice-Cream Lab is going to have to beef up their menu options and/or offer customization for its patrons. I’m not saying it was “never again” awful, but with Sprinkles just down the street, you’ll likely find me there. I not 100% sure Ice-Cream Lab has staying power.

CONS: Non-customization available, pricey (not surprising), not a lot of seating, and a very limited menu.

Film: A Place at the Table

I learned something earlier this week that once I really internalized it became completely bewildered then saddened. Apparently, the fact that I can walk into any major grocery store in Los Angeles, California and readily purchase an abundance and plentiful selection of fresh fruits and vegetables is a privilege. Yes, a privilege. And not compared to what one might think in an unfortunate, but obvious third world country sense; but compared to neighboring states in the United States of America.

Directors Kristi Jacobson and Lori Silverbush take a bleak look at hunger in arguably the wealthiest country in the world in their documentary, A Place at the Table. “Food insecurity” or the consistent condition of not knowing where your next meal comes from affects nearly 50 million Americans currently. As told through the eyes of seemingly “normal looking” people you might pass on the street, I really comprehended the efficacy in the statement that everyone has a story, everyone has a struggle, and this struggle is wildly affecting our youth.

Did I know that people go hungry in this country? Yes, of course I did. Did I know that a large number of people that deal with food insecurity many times have full-time employment, yet cannot feed their families due to poor wages and the harsh economic climate? Sadly, yes. Did I know that people who live in lower socioeconomic parts of this country have to drive upwards of 30 miles round trip to even access fresh produce because it’s not readily available at their local grocery store (even if you live in an urban populated city?). Not fully. Did I know and truly understand the correlation that while Mississippi has the highest rates of obesity in this country, it also has the highest hunger rate? No.

This is the power of documentary film making.

The film delves into the cause and effect of food insecurity, while linking this growing problem to largely financial, social, and political connotations. This exploration ranges from families that don’t readily live in moderately affluent areas, and therefore, don’t have easy access to healthy food options; to how funding for food assistance programs is being cut at many levels by the Federal Government; to the increase of food banks and charity work to assist the hungry; to how education and political awareness is the answer.

The takeaway from this well-executed and enlightening film is that there is more than enough resources to feed every single person in this country. In fact, America encountered a similar problem 4 decades ago and with the aid of the Federal Government, found concrete solutions to hunger. It’s time to make the underfed our priority again. I would venture to say that the common person (like myself) knows about American hunger, but does not fathom the depth of the issue.

What I take for granted walking into any grocery store, others lack in basic resource. The next time I head for the produce section, I will surely do so with equal parts gratitude and disgust that every American cannot access the sweetness of a strawberry, or the crisp crunch of a bed of lettuce to make a salad.

Please see their website if you’d like to join in on being the change. I encourage everyone to see this moving yet disturbing film. It will surely spark conversation.

Week 2 into the Fall season and the L.A. heat wave continues. A few days ago, a great idea came upon my boyfriend and I as we were running some errands in West Hollywood that momentarily (and I mean momentarily!) made me grateful for the heat: a more than justifiable pit stop to Millions of Milkshakes.

Of course, I’ve been to Millions of Milkshakes before, but this was my first time visiting the original location that opened in 2008. Aside from the loud music (must every L.A. establishment give off the “we’re so hip party vibe” by making you scream your order at the cashier?), the air-conditioning was welcomed and the menu continues to be fun. You can get creative however you choose by customizing a creamy treat to your exact liking, ordering from their popular shakes selection; or if you really want to be creepy and channel your favorite celeb in an intimate way, you can order from the celebrities menu where an A-lister (but most times a total D-lister) has created and endorses their own personal concoction. P.S. I know we are all human and have worth, but why is Ocotomom on this list?

I went with “The Million Dollar Shake” from the most popular shakes menu, made with Ferrero Rocher chocolates and fresh strawberries. It was too hot to get cute, I’m still reeling from my obsession with mixing chocolates and strawberries together in anything, and I thought the idea of saying “I’ll take a Miley Cyrus to-go” was silly. My guy didn’t follow the leader at all, and went customized – vanilla ice cream with peanut butter M&M’s.

Worth. The. Hype. Now I understand why milkshakes bring all the boys to the yard!

Just past the congestion of the infamous meeting of Sepulveda and Santa Monica Boulevards, under the ramp of the 405 freeway, and immediately to your left – rests one of my favorite L.A. movie theaters, The Nuart.

Though it’s apart of the Landmark family, The Nuart keeps that off-beat theater vibe well in tact from the marquee down to the strictly independent and documentary focused programming you’ll find here.

It was a more “fall-esque” Monday evening. The weather a bit chillier than it had been and the sun setting a little earlier than in recent weeks, a small indication that Autumn is slowly making its way to Los Angeles. After a quick and cheap breakfast for dinner stop at what used to be Delores’ Restaurant right down the street from the theater (that’s changed menus twice and now its name – spawning a much more mediocre dining experience), we headed back to the theater to learn “How to Survive A Plague.”

What a powerful and thought-provoking way to start the week. The documentary chronicles the New York activist scene fighting the lack of attention from the US government, hospitals, and drug companies to the raging AIDS epidemic stealing the lives of millions in the gay community beginning in the early 1980’s and until a treatment was discovered to survive. Most impressive about the film is that it’s mostly compiled of and told through the use of archival footage of old Act Up and TAG activist meetings, media coverage of protests/demonstrations across the country, and personal home video.

I left the theater feeling like I had a solid understanding of the struggle it took to get medication, education, and compassion towards what was a modern American plague only 30 short years ago. I couldn’t help but think about how a similar uprising could benefit the millions of people in Africa as I type this sentence battling the same disease, among arguably even worse circumstances.

I highly recommend this film for anyone who wants a crash course (for lack of a better phrase) into a hard-fought battle over basic human rights and the AIDS virus, or for anyone who just needs some inspiration to go out there, follow your beliefs, and “Act Up.”

You’ll be surprised what you can do when you don’t give up.